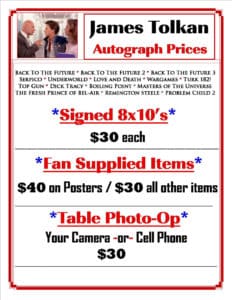 James Tolkan, widely known for his role as Mr. Strickland in the Back To The Future trilogy (and as Stinger in Top Gun, among hundreds of other roles on stage, in film and television) will be attending the Boston SouthCoast Comic Con & Collectibles Extravaganza on July 22 & 23 at the Hanover Mall Event Center in Hanover MA, to sign autographs and do photo ops for fans (fee for autographs and photo ops separate from admission) along with a Q&A session with James about his career.

There is a special VIP pass available that includes an autograph, professional photo op, admission, a reserved seat for the Q&A and a special laminated badge and on sale now.

There will also be a DeLorean Time Machine for photo ops, plus the number one Michael J. Fox look-alike, Matt Bell, and his accomplice from last year’s anniversary tour, Doc Brown cosplayer Eric Sellin, all there for Fan photo ops.