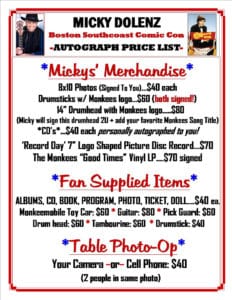 Micky Dolenz, singer and drummer of The Monkees will be appearing to meet fans at the Summer edition of the Boston SouthCoast Comic Con & Collectibles Extravaganza on July 22 & 23 at the Hanover Mall Event Center in Hanover MA.

2016 also saw the release and success of the Monkees newest album hitting the top of the charts and gaining critical review 50 years after their first one, and featuring songs written to todays top songwriters.

A full size authentic replica of the Monkeemobile will also be on site for photo ops.